Latest from my workshop 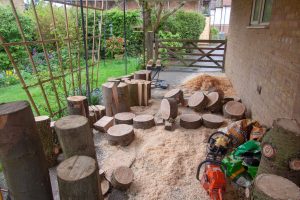 Spent a happy hour or two yesterday under the car port processing some newly acquired timber.  Some Hornbeam, Beech, Cherry and Monkey Puzzle.  One piece of the Beech is nicely spalted and some of the Hornbeam is showing the start of spalting – so I think I’ll just lay those down the bottom of the garden for a month or two and see what nature can do.  The Monkey Puzzle should be interesting – I’ve not turned it before so watch this space.

I have no fairs currently planned, but watch this space...
More information on my fairs page.

Latest from my workshop...

All styles are available in any wood (assuming I can get hold of it ) and in the following formats and finishes:

Spalted timber is basically timber with changes in colour and black banding that occurs as the timber starts to decay. Sometimes this simply detracts from the wood and makes it worthless, but it can also give some spectacular results. It is caused by the interaction of different fungi (I believe that the species vary depending upon the species of the timber). The black banding or veining are the “walls” that the tree creates to try and compartmentalise the disease or decay as the fungus attacks. For more information, do a web search for CODIT (Compartmentalisation Of Decay In Trees).

Many timbers exhibit this spalting, but the most spectacular (that I have found) are Beech and Hornbeam.  However, I have also had some very nice spalted Elm and spalted Ash.  Sourcing good spalted timber is difficult, at times verging on impossible.  Some will be naturally spalted, where the tree has fallen and simply been left to nature, and some will be “forced”, with the boards or slabs kept warm and damp after milling.  Either way, catch it too soon, and the effect is very sparse, and catch it too late and it’s too soft to do much with.  But catch it just right and…  Well, you can see some of the results in my gallery.